A fabrication made in Austria for 100%

The success of Ganser lift systems has its roots in a longtime development of the company, which goes back to the year 1965. Within years the company has positioned itself as the most important partner in the rage of lift development and lift production on the market. This goes along with the vision of enabling people all over the world an accessible life. Together with a customer oriented company management, excellent employees as well as a global trader network it was possible to make the vision of an accessible life in numerous private homes, public institutions and enterprises reality. The team of Ganser liftsystems stands for flexibility, expertise as well as reliability and makes it possible that customers all over the world can profit from the individually produced lift systems and have therefore an accessible life. Ganser liftsystems also makes your vision to reality – entrust us with your challenges. 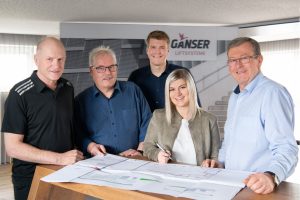 Foundation of the company Johann Ganser

Today`s Ganser Maschinen GmbH was originally founded as a sole proprietorship by Johann Ganser, who dealt at first with trading and repairing agricultural machines as well as automobile.

The spirit of innovation of the founder was decisive for the start of an own product development as well as a corresponding product division. In addition initial exports into the Switzerland were made.

The product range has been continuously expanded and a serial production of retrofit tractor cabins followed.

In this period we were official, regional contractual partner of various car manufacturers such as Audi, Peugeot and Fiat.

In the year 1978 the first milestones were set in the field of rehab engineering. The first fully-automated lifting bathtube from Ganser was produced and sold.

In this year Ganser Maschinen GmbH was founded. At the same time the development of a platform stairlift due to a customer`s request started. This was the beginning of the lift production.

Production of the first vertical lifts

The product range was expanded with vertical liftsystems, today`s GHB20. Already in that year it was possible to overcome lifting heights up to 12 m.

In 1996 the first stairlift was exported into the neighbouring Switzerland. In the following years  there was an additional export into countries of the European Union such as France, Norway and Belgium

Opening of a new car dealership and an agricultural machines center

In order to position the company as well in other branches in the long term, an investment  into an nearby car dealership and agricultural machines center was made. This step focused on the regional customer relationship.

Start of construction for the new production hall for stair lifts

The continuous growth of the company led to another expansion of the production area in terms of a new and modern assembling hall.